Cap: 5-25 mm in diameter, conic to convex to nearly hemispheric sometimes with an acute umbo (nipple). Pale bluish to olive maturing to a mottled olive brown, drying to nearly white. Viscid when moist with an easily separable gelatinous pellicle.

Psilocybe semilanceata, commonly known as the liberty cap, is a species of fungus which produces the psychoactive compounds psilocybin and baeocystin. It is both one of the most widely distributed psilocybin mushrooms in nature, and one of the most potent. The mushrooms have a distinctive conical to bell-shaped cap, up to 2.5 cm (1.0 in) in diameter, with a small nipple-like protrusion on the top.

They are yellow to brown, covered with radial grooves when moist, and fade to a lighter color as they mature. Their stipes tend to be slender and long, and the same color or slightly lighter than the cap. The gill attachment to the stipe is adnexed (narrowly attached), and they are initially cream-colored before tinting purple as the spores mature. The spores are dark purplish-brown in mass, ellipsoid in shape, and measure 10.5–15 by 6.5–8.5 micrometres.

Psilocybe semilanceata is a very variable species. Typical common types have a very conic cap with a distinct nipple and a dark chestnut brown coloration. The Pacific Blue strain is an uncommon but not necessarily rare color variant with unusual bluish tones and a more hemispheric cap shape. The blue coloration is most apparent in young specimens and in mushrooms growing under shady conditions.

Psilocybe Semilanceata spores are a deep reddish purple-brown color. The use of an optical microscope can reveal further details: the spores are oblong when seen in side view, and oblong to oval in frontal view, with dimensions of 10.5–15 by 6.5–8.5 μm. The basidia (spore bearing cells of the hymenium), are 20–31 by 5–9 μm, four-spored, and have clamps at their bases; there are no basidia found on the sterile gill edge. The cheilocystidia (cystidia on the gill edge) measure 15–30 by 4–7 μm, and are flask-shaped with long thin necks that are 1–3.5 μm wide. P. semilanceata does not have pleurocystidia (cystidia on the gill face). The cap cuticle is up to 90 μm thick, and is made of a tissue layer called an ixocutis—a gelatinized layer of hyphae lying parallel to the cap surface. The hyphae comprising the ixocutis are cylindrical, hyaline, and 1–3.5 μm wide. Immediately under the cap cuticle is the subpellis, made of hyphae that are 4–12 μm wide with yellowish-brown encrusted walls. There are clamp connections present in the hyphae of all tissues. 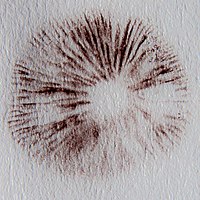 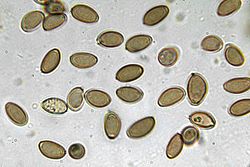 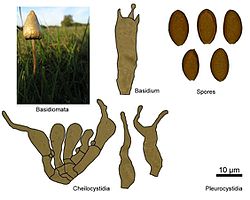 The species was first described by Elias Magnus Fries as Agaricus semilanceatus in his 1838 Epicrisis Systematis Mycologici. Paul Kummer transferred it to Psilocybe in 1871 when he raised many of Fries’s sub-groupings of Agaricus to the level of genus. Panaeolus semilanceatus, named by Jakob Emanuel Lange in both 1936 and 1939 publications, is a synonym. 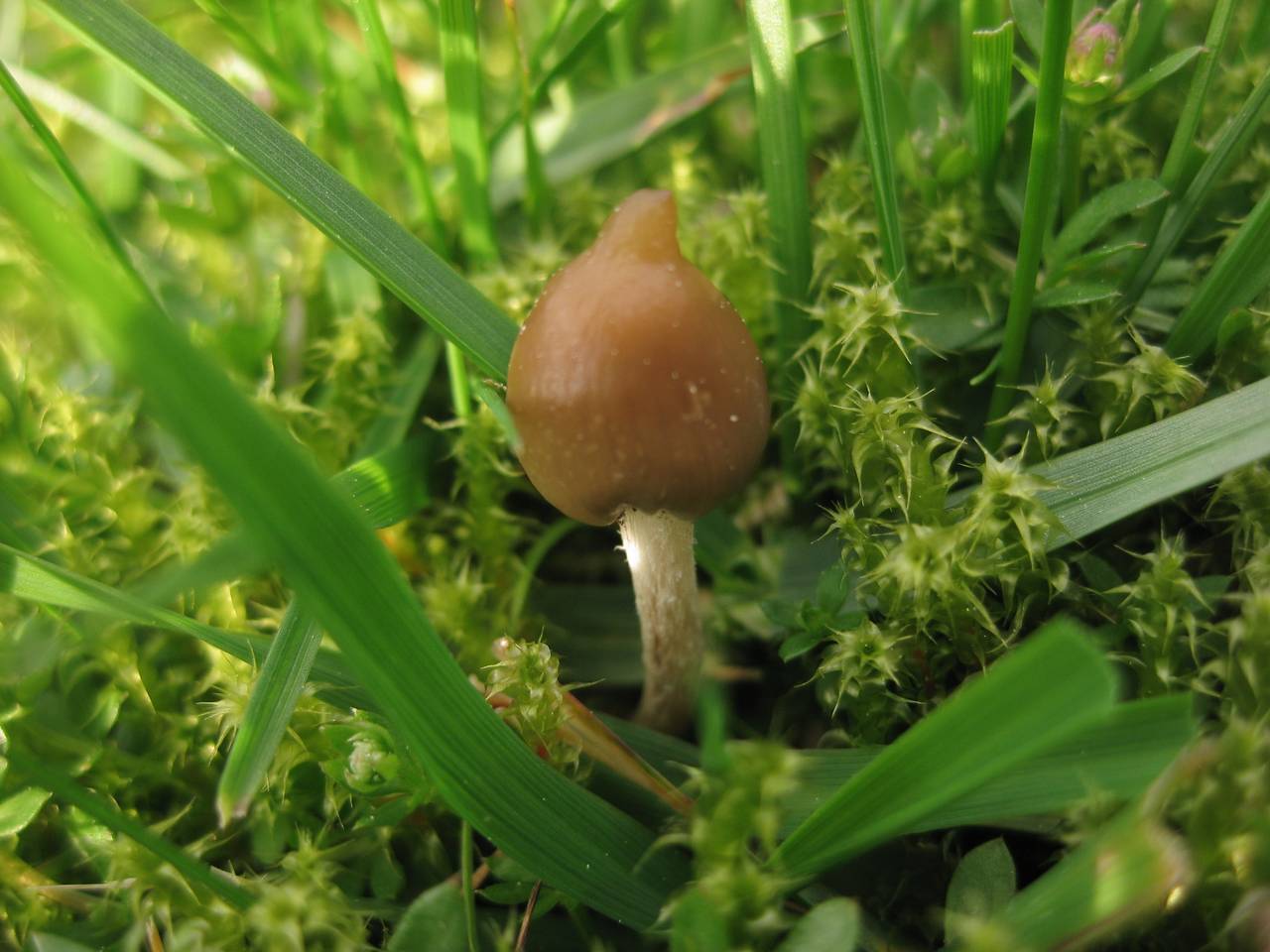 The “Liberty Cap” is named after its prominent and obvious umbo (the nipple in the center of the cap) which resembles the Phyrigian cap worn by freed slaves in ancient Rome.

The connections to the words ‘Freedom’ and ‘Liberty’ with this mushroom are hard to ignore.

Get a good look. This iconic mushroom is also the type species (the species that represents the whole genus)  for Psilocybe.

Notice the conical shape and smaller stature. The caps don’t normally get bigger than an inch in diameter. 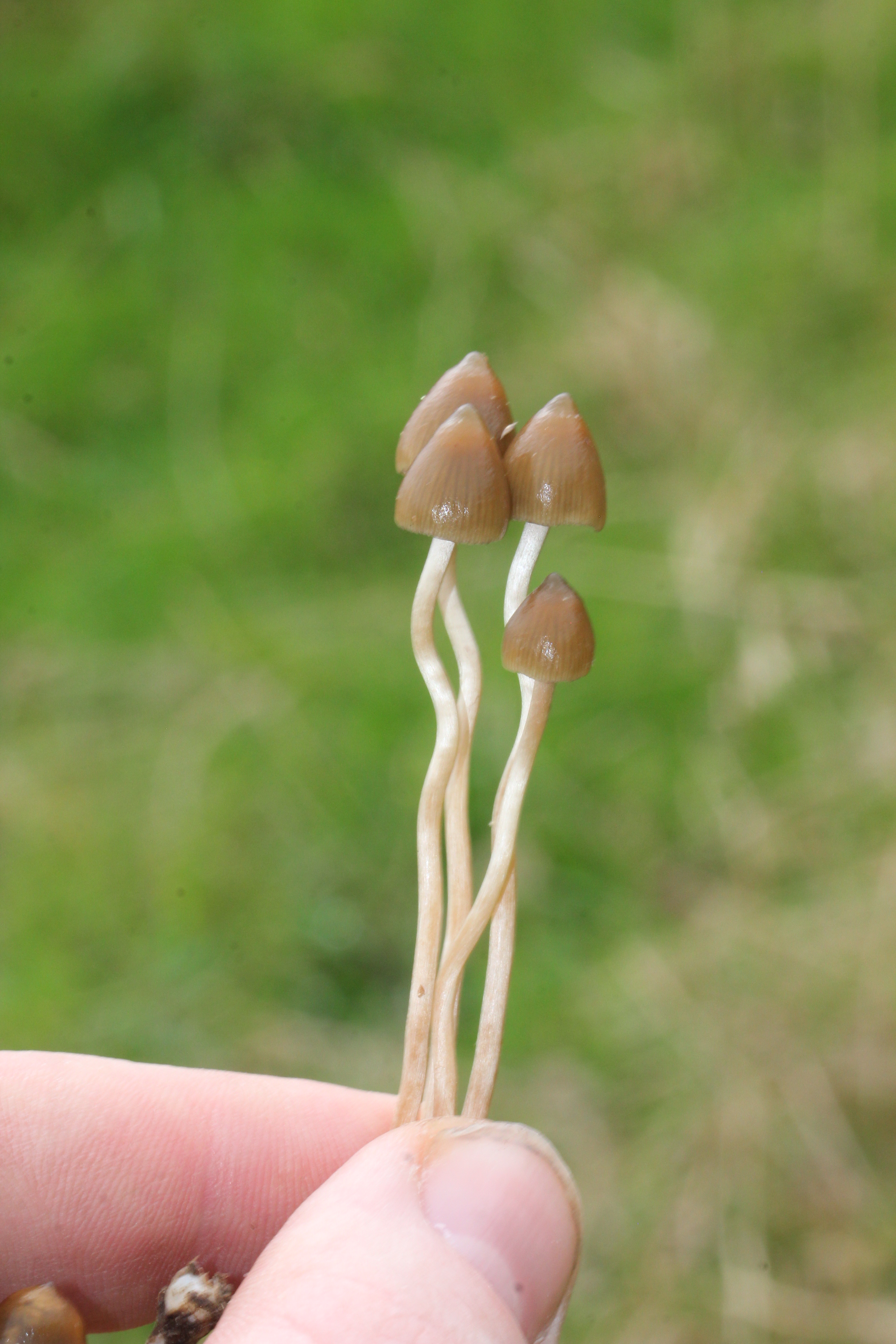 The Image below you can see the gills sporulating and falling downward. We can tell because of the purple-brown staining happening around the annuluar zone on the stipe.

This is simultaneously confirming the correct spore color for the “Liberty Cap” as well as displaying common feature of this mushroom.

The gills will be somewhat crowded and turn from pale to purple-brown in old age. The gill attachment to the stem can be called adnexed, or rather a very light attachment. 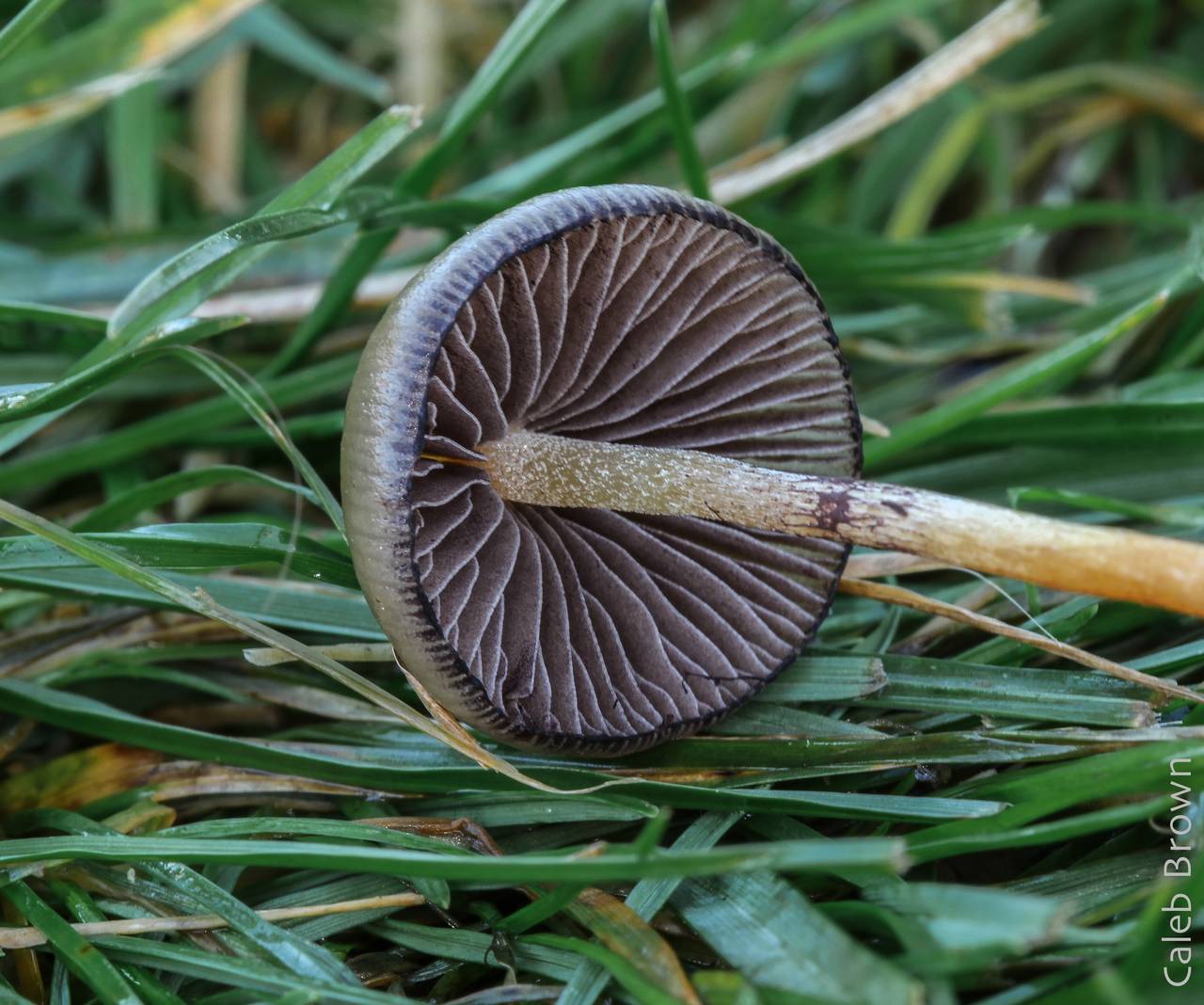 Becoming intimate with the many features of the mushroom that you’re looking for is KEY.

Now that we’re familiar with the Liberty cap, let’s get on with the lookalikes.

Lacking nutrients and toxins, this frail thing seems to have only been placed here to resemble your “Liberty Caps”and nothing more.

What to notice in this lookalike:

x  Not hygraphanous. Cap is always a pale buff color 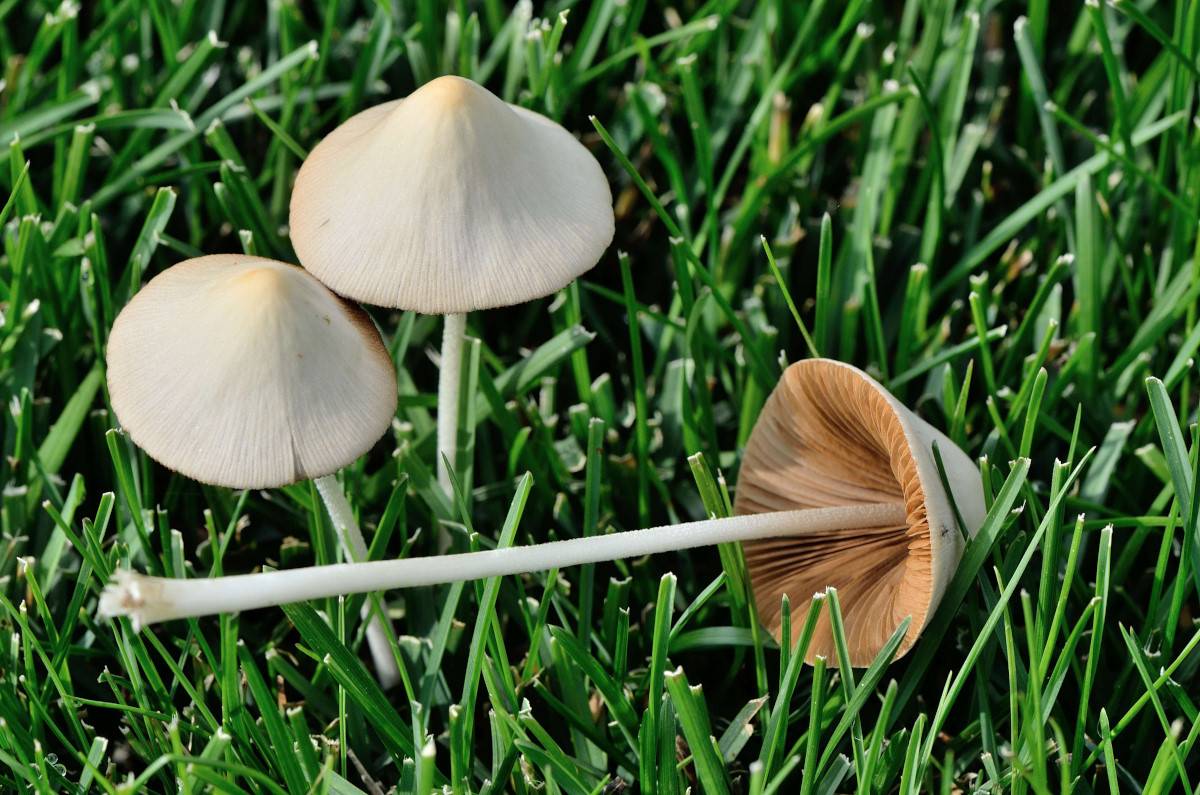 Where Do Psilocybe Semilanceata Grow

Psilocybe authority Gastón Guzmán, in his 1983 monograph on psilocybin mushrooms, considered Psilocybe semilanceata the world’s most widespread psilocybin mushroom species, as it has been reported on 17 countries. In Europe, P. semilanceata has a widespread distribution, and is found in Austria, Belarus, Belgium, Bulgaria, the Channel Islands, Czech republic, Denmark, Estonia, the Faroe Islands, Finland, France, Georgia, Germany, Greece, Hungary, Iceland, Ireland, Italy, Latvia, Lithuania, the Netherlands, Norway, Poland, Russia, Slovakia, Spain, Sweden, Switzerland, Turkey, the United Kingdom, Ukraine and Pakistan. It is generally agreed that the species is native to Europe; Watling has demonstrated that there exists little difference between specimens collected from Spain and Scotland, at both the morphological and genetic level.

The mushroom also has a widespread distribution in North America. In Canada it has been collected from British Columbia, New Brunswick, Newfoundland, Nova Scotia, Prince Edward Island, Ontario and Quebec. In the United States, it is most common in the Pacific Northwest, west of the Cascade Mountains, where it fruits abundantly in autumn and early winter; fruiting has also been reported to occur infrequently during spring months.

No products in the cart.